Cloning is the process of generating a genetically identical copy of a cell or organism. Cloning often occurs in nature, for example when a cell replicates asexually without any genetic alteration or recombination. Prokaryotic organisms (organisms that lack a cell nucleus), such as bacteria, create genetically identical duplicates of themselves through binary fission or budding. In eukaryotic organisms (organisms that have a cell nucleus) such as humans, all cells that undergo mitoses, such as skin cells and cells lining the gastrointestinal tract, are clones; the only exceptions are gametes (eggs and sperm), which undergo meiosis and genetic recombination.

In biomedical research, cloning is broadly defined as the duplication of any type of biological material for scientific studies, such as a piece of DNA or an individual cell. For example, segments of DNA replicate exponentially through a process known as a polymerase chain reaction, or PCR, a technique that is widely used in basic biological research. The type of cloning that is the focus of much ethical controversy involves the generation of cloned embryos, particularly of humans, that are genetically identical to the organisms from which they are derived, and the subsequent use of these embryos for research purposes. therapeutic or reproductive purposes.

Reproductive cloning was originally carried out by artificial “twinning” or embryo splitting, which was first performed on a salamander embryo in the early 20th century by the German embryologist Hans Spemann. Later, Spemann, who received the Nobel Prize in Physiology or Medicine (1935) for his research on embryonic development, theorized about another cloning procedure known as nuclear transfer. This procedure was performed in 1952 by American scientists Robert W. Briggs and Thomas J. King, who used DNA from embryonic cells of the frog Rana pipiens to generate cloned tadpoles. In 1958, British biologist John Bertrand Gurdon successfully carried out nuclear transfer using DNA from adult intestinal cells of African clawed frogs (Xenopus laevis). Gurdon received a share of the 2012 Nobel Prize in Physiology or Medicine for this breakthrough.

Advances in the field of molecular biology led to the development of techniques that allowed scientists to manipulate cells and detect chemical markers that signal changes within cells. With the advent of recombinant DNA technology in the 1970s, scientists were able to create transgenic clones, clones with genomes that contained bits of DNA from other organisms. Beginning in the 1980s, mammals such as sheep were cloned from early, partially differentiated embryonic cells. In 1996, British developmental biologist Ian Wilmut generated a cloned sheep, named Dolly, by nuclear transfer involving an enucleated embryo and a differentiated cell nucleus.

This technique, which was later refined and became known as somatic cell nuclear transfer (SCNT), represented an extraordinary advance in cloning science, as it resulted in the creation of a genetically identical clone of an adult sheep. He also indicated that it was possible for the DNA in differentiated somatic (body) cells to revert to an undifferentiated embryonic stage, thus re-establishing pluripotency: the potential of an embryonic cell to become any one of numerous different types of mature body cells. They form a complete organism. The realization that somatic cell DNA could be reprogrammed to a pluripotent state significantly affected research on therapeutic cloning and the development of stem cell therapies. 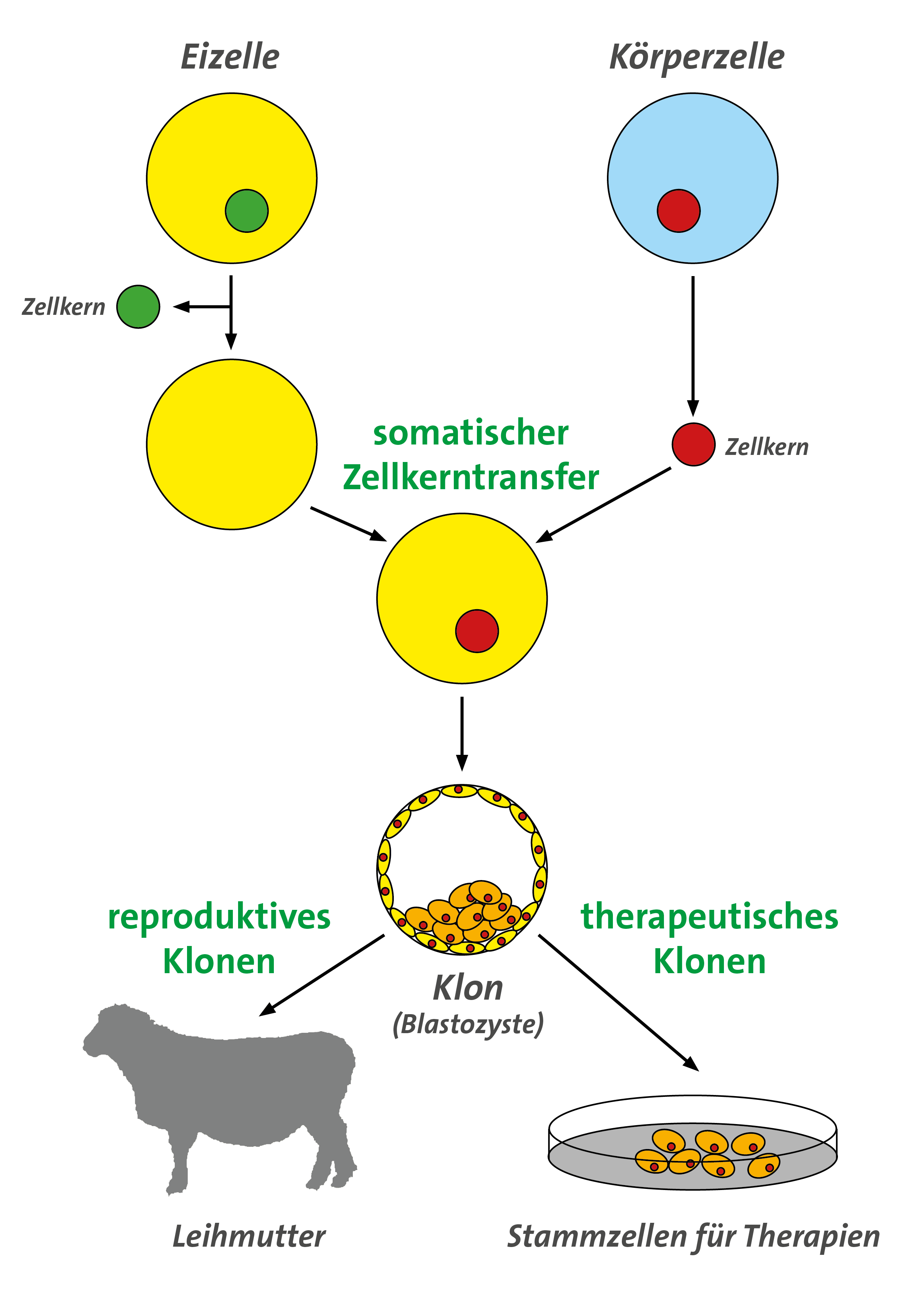 Shortly after Dolly’s generation, SCNT cloned several other animals, including pigs, goats, rats, mice, dogs, horses, and mules. Despite those successes, the birth of a viable SCNT primate clone would not be realized until 2018, and in the meantime, scientists used other cloning processes. In 2001, a team of scientists cloned a rhesus monkey through a process called embryonic cell nuclear transfer, which is similar to SCNT except that it uses DNA from an undifferentiated embryo.

In 2007, SCNT cloned embryos from macaque monkeys, but those clones lived only to the blastocyst stage of embryonic development. It was more than 10 years later, after improvements were made to SCNT, that scientists announced the live birth of two clones of the cynomolgus macaque (Macaca fascicularis), the first primate clones to use the SCNT process. (SCNT has been carried out with very limited success in humans, in part due to problems with human eggs as a result of maternal age and environmental factors.)

Reproductive cloning involves the implantation of a cloned embryo into a real or artificial uterus. The embryo develops into a fetus which is then carried to term. Reproductive cloning experiments have been conducted for more than 40 years through the embryo-splitting process, in which a single early-stage two-cell embryo is manually divided into two single cells and then grows as two identical embryos. Reproductive cloning techniques underwent a significant change in the 1990s, following the birth of Dolly, which was generated through the SCNT process. This process involves the removal of the entire nucleus from a somatic cell (body) of an organism, followed by insertion of the nucleus into an egg cell that has had its own nucleus removed (enucleation).

Once the somatic nucleus is inside the ovum, the ovum is stimulated with a mild electrical current and begins to divide. Thus, a cloned embryo is created, essentially an embryo of an identical twin of the original organism. The SCNT process has undergone significant refinement since the 1990s and procedures have been developed to prevent damage to ova during nuclear retrieval and somatic cell nuclear insertion. For example, the use of polarized light to visualize the nucleus of an ovum facilitates the removal of the nucleus from the ovum, resulting in a healthy and viable ovum and thus increasing the success rate of SCNT.

Reproductive cloning by SCNT is considered highly harmful as fetuses from embryos cloned by SCNT rarely survive gestation and are usually born with birth defects. Wilmut’s team of scientists needed 277 tries to create Dolly. Similarly, attempts to produce a macaque monkey clone in 2007 involved 100 cloned embryos implanted into 50 female macaque monkeys, none of which resulted in a viable pregnancy. In January 2008, scientists at Stemagen, a California stem cell research and development company, announced that they had cloned five human embryos using SCNT and that the embryos had matured to the point where they could have been implanted into a uterus. However, the scientists destroyed the embryos after five days for molecular analysis.

Therapeutic cloning is intended to use cloned embryos for the purpose of extracting stem cells from them, without ever implanting the embryos in a uterus. Therapeutic cloning allows the cultivation of stem cells genetically identical to those of a patient. Stem cells could be stimulated to differentiate into any of the more than 200 cell types in the human body. The differentiated cells could then be transplanted into the patient to replace diseased or damaged cells without risk of rejection by the immune system. These cells could be used to treat a variety of conditions, including Alzheimer’s disease, Parkinson’s disease, diabetes mellitus, stroke and spinal cord injury. In addition, stem cells could be used for in vitro (laboratory) studies of normal and abnormal embryonic development or to test drugs to see if they are toxic or cause birth defects.

Although stem cells have been derived from cloned embryos of animals such as mice, the generation of stem cells from cloned primate embryos has proven to be exceptionally difficult. For example, in 2007, stem cells successfully derived from cloned macaque embryos were able to differentiate into mature heart cells and brain neurons. However, the experiment started with 304 eggs and resulted in the development of only two stem cell lines, one of which had an abnormal Y chromosome. Likewise, the production of stem cells from human embryos has been plagued by the challenge of maintaining embryo viability.

In 2001, scientists at Advanced Cell Technology, a Massachusetts research firm, successfully transferred DNA from human cumulus cells, which are cells that attach to and nourish human eggs, into eight enucleated eggs. Of these eight ovules, three developed into early-stage embryos (containing four to six cells); however, the embryos survived only long enough to divide once or twice. In 2004, South Korean researcher Hwang Woo Suk claimed to have cloned human embryos using SCNT and extracted stem cells from the embryos. However, this later turned out to be a fraud; Hwang had fabricated evidence and carried out the process of parthenogenesis, in which an unfertilized egg begins to divide with only half a genome.

The following year, a team of researchers from the University of Newcastle upon Tyne were able to grow a cloned human embryo to the 100-cell blastocyst stage using embryonic stem cell DNA, although they did not generate a stem cell line from the blastocyst. Since then, scientists have successfully derived embryonic stem cells from SCNT human embryos. Progress in research on therapeutic cloning in humans has been slow relative to the advances made in reproductive cloning in animals. This is primarily due to the technical challenges and ethical controversy that arise from obtaining human eggs solely for research purposes. In addition, the development of induced pluripotent stem cells, which are derived from somatic cells that have been reprogrammed to an embryonic state by introducing specific genetic factors into cell nuclei, has defied the use of cloning methods and human egg cells.